Students from a number of colleges, many of whom were competing for the first time, were put to the test as they faced the best talent from their peers at each skill level. The competition is designed to give students a chance to build new skills, gain confidence and get a taste for the heat of the kitchen.

Competitors were able to utilise every inch of the College’s state of the art kitchen facilities as they battled to deliver their best attempts at a number of challenges including the Chicken Challenge, The Pasta Class and Street Food Class.

WCS certainly seemed to have the home advantage as our talented students received the most medals out of all the colleges participating. Chris Watson, the Curriculum Enhancement Lecturer at our Paisley Campus said

Tuesday was a massive success for the college Hospitality department. All students would agree that it was hard work preparing for the competition, but the end result was well worth it all!.

Gold medalist Craig Brown, 29, from Paisley said “We were really given the freedom and encouragement by our mentors to think outside the box. I would especially like to thank my lecturer Chris Watson as it was him that really set me up to be able to do as well as I did.” Craig won ‘Best in Class’ for his street food style seafood tacos.

Sarah Wilson, 23, from Johnston won a gold medal and ‘Best in Class’ for her smoked haddock tagliatelle pasta dish.

What a great experience, I have never done anything like this in my life. I will definitely be taking part next year.

Nicola McFadyen, 33, from Barrhead also won a gold medal for her street food chicken. Nicola said, “After practicing my dish for several weeks, I felt the pressure to work faster during the competition”.

Wayne Harris, Chairman of the Judges for the Craft Guild of Chefs, said, “We’re incredibly lucky to have a team of fantastic colleges on board who welcome us back every year and hard-working lecturers who encourage their students to compete.” 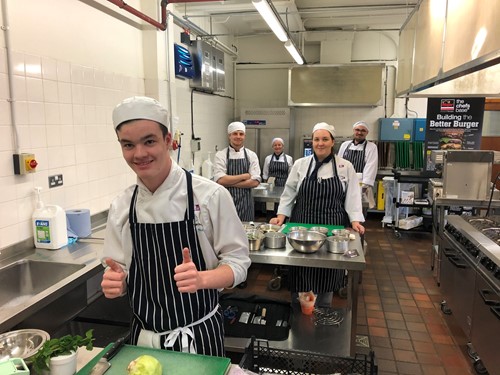