Behind the Lens at the BBC

The team filled a variety of office-based and technical roles in production, camera, lighting, and editing. During the fortnight, they produced a short drama shot on the backlot of River City.

The students acquitted themselves well and received warm praise from the BBC team.

Training Co-Ordinator Charlie Tilly thanked the College for sending “such a great bunch of people”.

The scheme was a great success and three of the seven have already secured employment as a result.

Students and the BBC team gained a lot from the collaboration. The training team commented that it “was refreshing to be surrounded by such enthusiasm and gave us a new lease of life!”

The students were a credit to themselves and the department.

Charlie and the training team were particularly impressed by their technical knowledge, interest, enthusiasm, and preparedness which were “far higher than the Heads of Department were expecting”.

The outcomes of the scheme have been very well received throughout the BBC, and they are hopeful that it will run again in the future. 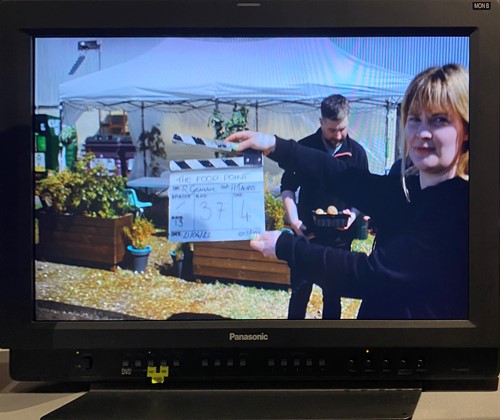 Martin McCardie, Series Producer on River City said, “The HNC and HND students from West College Scotland applied themselves very well and conducted themselves in a professional manner throughout the shoot.

I am not surprised that some of them have been employed in the industry already.

River City have indicated that they would like to continue our participation on any future scheme and provide similar opportunities for our students going forward.”