Richard, 92, is a co-founder of Traverse Theatre in Edinburgh and a strong supporter of the arts sector within Scotland, attending every Edinburgh Festival since it started in 1947. Richard was accompanied by Dr Alan Flowers, scientist and activist, who discussed with students his cultural links to Edinburgh Festival and Belarus. 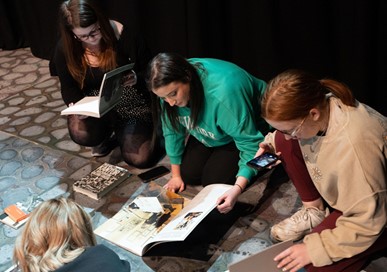 Lecturer and Degree Co-ordinator, Una McDade, spoke with us about the event:

“It isn’t every day our students meet with a living legend in Scottish and International theatre, but on Wednesday 9th November we were honoured to greet Richard Demarco and introduce him to our 3rd and 4th year BA Hons students.  Richard shared his passion for art in the broadest sense and reminded each person in the theatre with him, that they are born an artist and it is important to use their talent and creativity to change the world around them.  Richard has worked tirelessly to ensure that the work of Eastern Bloc artists has been shared with the West and having been introduced to Polish practitioner Tadeusz Kantor the degree students were delighted to hear first-hand stories of his first visit to the Edinburgh Festival facilitated and funded by Richard.  Students heard how Richard and his friends founded the Traverse Theatre in Edinburgh and were astounded by the fact that he has attended every Edinburgh Festival since its inception in 1947 where he saw artists such as the young Richard Burton at the start of their careers . .

We hope to continue working with Richard on a joint project in the near future and we are looking forward to visiting the Polish Room at Summerhall in Edinburgh to see some of the thousands of exhibits held at the Demarco Archive”. 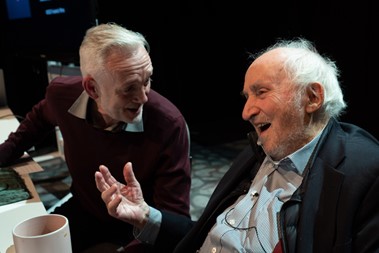 “To live a life each day in the way you love leads to a life well lived and loved by others in it. But what if that love is to bring and share art that is yet to find providence? Ricardo Demarco understands it takes a lifetime for love to spread, his legacy is curation of the art that leaves us, the audience, with the love for the artists whose work embodied their truth, and our lives.

He self refers as an artist but for all his achievements he is so much more - philosopher, provocateur and trailblazer. An innovator that defied artistic boundaries without sacrificing principles.

Famously disregarding financial value- appreciating everything only for its subjective artistic contribution not popular opinion. One of his legacies, the Edinburgh Fringe Festival, left his approval in 1977, becoming too commercialised and losing its original contribution.

But his commitment to creating a rainbow bridge over an iron curtain connected the east and west of Europe through art forever. A true hero for the hero less. A keystone of Scottish culture, he enriched the global cultural dictionary, which we all now regard as the norm.

It was an honour to connect and be left fluent in the language of Ricardo Demarco”.

We’re incredibly grateful to Richard Demarco and Dr Alan Flowers for engaging with students and delivering an inspirational, insightful talk which we’re sure students and staff will remember for a very long time. Everyone is really looking forward to growing this special relationship in the future. 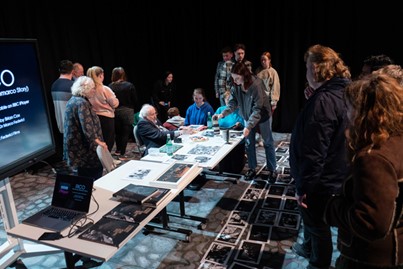