Twenty-six year old Ryan Clark is embracing life as a musician, traveling the globe with his band Catholic Action. Recognising the fragility of a career in music, Ryan is keen to relish all of the opportunities on offer to him.

Ryan said, “I wasn’t sure exactly what I wanted to do when I left school, but I knew that I wasn’t ready to finish education and try and get a job. I’d studied music at school which I had enjoyed, but following the curriculum meant that we covered a lot of classical and Scottish music which I wasn’t necessarily interested in or satisfied with, so I wanted to learn more, which is what brought me study music at college.

‘What I enjoyed most about the course was the fact that it was tailored to modern music and I was given the opportunity to play in a band – something I’d never done before. I’d played drums for years but never with other people, so that feeling of playing for the first time with a group was really exciting.”

Progressing on to 3rd year at university, Ryan continued to play with his college band the Moscow Olympics before being scouted by Catholic Action who were looking for a drummer to join their band.

Ryan continues, "Since leaving university I’ve been playing music. Some of it I put down to luck but I’ve also worked hard to be able play, record and tour as a job.

‘We knew that if we wanted to make a career out of it and ultimately make some money we needed to think bigger than Glasgow. We started with some gigs in Glasgow then some shows down south and then word just spread from there.

‘I’m just back from touring the UK and America, playing in countries like London, Paris, Berlin and Hollywood. We’ve recorded and released a debut album and are about to release our second one which we are really proud of.”

Reflecting on his career so far, Ryan is grateful for the experiences he has had, “Studying music has definitely been the right move for me and I’m super grateful to be doing something that I love and for everything that I have achieved so far.

Coming to college gave me the confidence and the skills to get where I am. It gave me the chance to meet and rehearse with likeminded people. I don’t think I’d be as confident as I am now if it hadn’t been for the opportunities to play live in venues like the ABC.

‘It’s a tough industry and we’ve learned a lot. We are in a great position now with the record deal that we have and the managers that we work with.

‘My advice to anyone thinking about pursuing a career in music would be to go for it, but don’t get too ahead of yourself. Try and be as grounded and professional as you can as it’s easy to lose yourself. Take each day as you can and just enjoy it.”

With summer on the way Ryan and his band are looking forward to festival season kicking off and continuing their work in the studio producing more records. 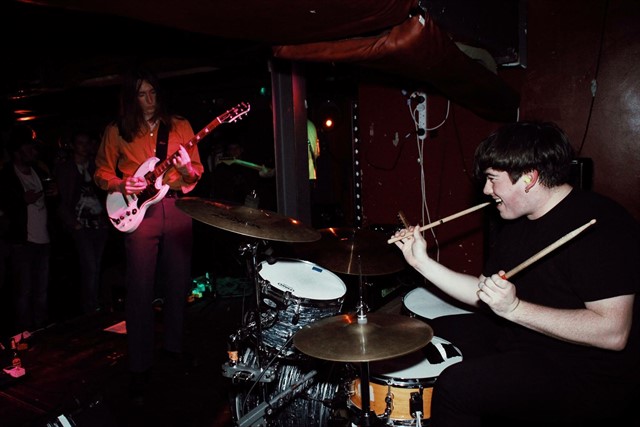